I do have to acknowledge, right out of the box, that this is quite a mindblowing topic even for the realm of the Geek Juice...

I've already mentioned this topic in some detail to Smeagol, Enok and Armand, but basically the situation is the following: My father does not buy new computers very often: His first computer - a high-end personal computer at that time - was a heavily loaded Macintosh Plus in 1986. Later, he got a Macintosh Performa 460 around '95 and just yesterday, he finally bought a MacBook Pro. Picking up the computer was a story in itself but I'll spare you - it was sweaty business

The described 10 year gaps between changing computers sound completely amazing to me. For instance, I got a full five years out of my previous computer (a PII 400mhz), but it was an excellently timed purchase and I ended up upgrading everything but the motherboard and the processor anyway. Migrating to a new computer was a piece of cake, too.

But what about my pa? His old computer, the Performa 460 and the new one, the MacBook Pro carry none of the ports the other one does. They are 101% incompatible, including the operating system, applications, ports, data storage, everything.

Still, files need be transferred - what to do? CD-ROMs? Fine otherwise, but we only have a 2x SCSI CD-ROM reader that was acquired early on... no burnin' on that. Try finding a cheap SCSI burner at this juncture (let alone buying that junk for just one use)! LAN? Daym, the older machine supports AppleTalk/LocalTalk instead of Ethernet and there's none of those supported in the MacBook anyway. Serial won't do, either, since neither carries one.

So the wildest plan that sounds like it could materialize I could devise - something that I've in fact wanted to do before - is hooking up the Performa's old 500mb external SCSI Seagate drive I bought from the UK to my PC. This is possible because I have an SCSI card that I acquired earlier for this very purpose.

But that's not all. As you guys know, there are four SCSI standards (SCSI-1, SCSI-2, SCSI-3 and Ultra-SCSI), several types of connectors and cables for each. Luckily they are all backwards-compatible, so that is not a problem in itself, but the connectors are. The good thing is, I finally discovered the right type of connector (after a gruelling scavenge for information, I might add) to stand between the HD, its original cabling and my old Ultra-SCSI card.

Such adapters (HD-50M to Centronics 50F) are very limited on the market, but luckily I was able to find a webstore that carries them for quite a fair price. After a shipping/payment mess I should be receiving my adapter next week. I'll keep you posted!
Top

Testify, brother, testify! Our sordid Mac past is coming to full light now - I just dug up Rip's old Macintosh LC and it works a charm! I'm going to try and make a ROM out of its system setup for emulating purposes

By Batman's greatest boner! I've installed Mac OS 7.5.3 and updated it to 7.5.5 onto a disk image file for Basilisk II - just the way it was back then. It's up and running now, but I will have to work out the kinks and see if I can actually run any programs with it.

I'm unbelievably happy with my progress, I've got Mac OS 9 running now inside the latest Mac OS X Tiger really well, everything I've tested so far has worked. Here's a picture of Rip and I playing Wolfenstein 3D Shareware: 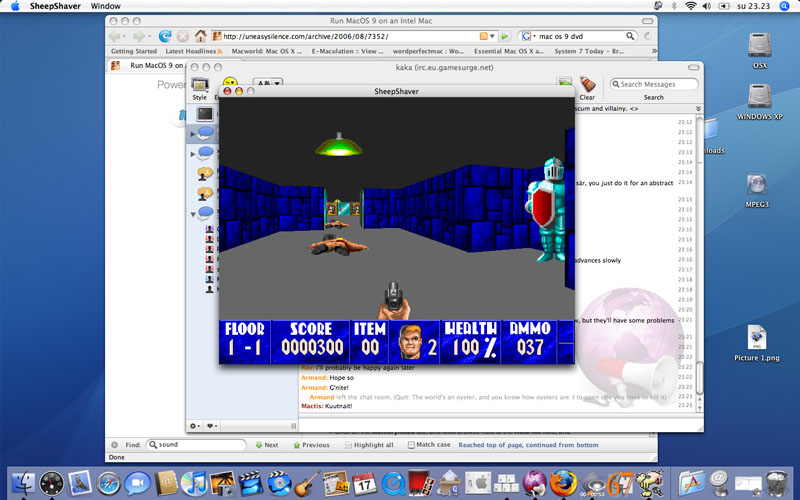 I've also gotten the networking to work, with the following, err, consequences: 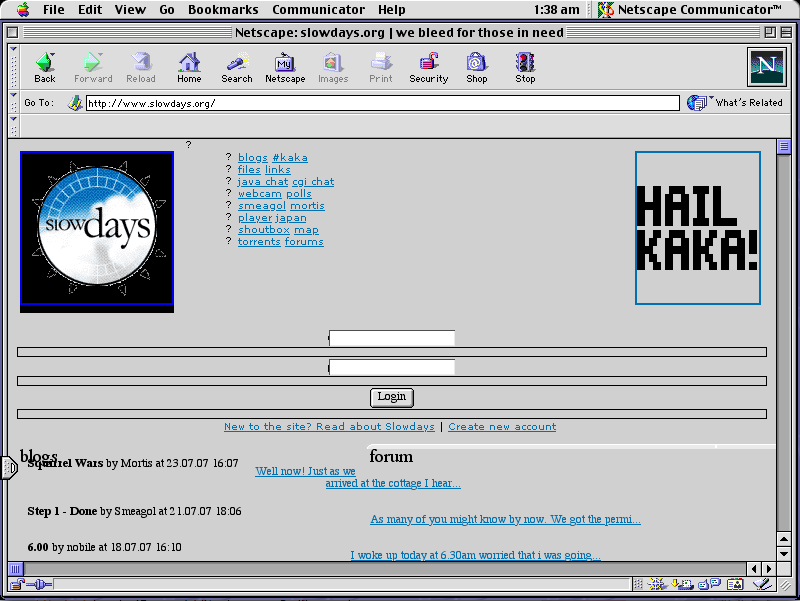 I've been reading articles (here and here, for instance) about the release of the first versions of Mac OS X and only now do I realize how kind of lucky I was to step outside the Mac world for a while. They've really rebounded with a far, far superior product while I've been messing around on Microsoft platforms. I've had to experience none of the expectations and disappointment that might have possibly been related to the releases of Mac OS 8, 9 and eventually X.

http://arstechnica.com/reviews/os/macosx-10-4.ars/21 wrote:Mac OS X started its life as the most ambitious consumer operating system ever produced. Apple abandoned its existing, 16-year-old code base for something entirely new. Out of the gate, Mac OS X was a technical curiosity with few applications, and a performance dog. A scant four years later, Tiger is a powerhouse that combines the best Unix has to offer with a feature-rich, user-friendly interface. The increasingly capable bundled applications are just icing on the cake. We've come a long way, baby.

Not very faint praise, is it? I'm guessing Leopard especially will be possibly your best chance in a long time to jump back on the Mac board!
Top

nobile wrote:i used to play wolfenstein when i was a kid =D

So that's why you're so violent and aggressive!
Top

Final breakthrough! I finally received the aforementioned SCSI adapter (HD-50M to Centronics 50F), installed my SCSI card, connected the Seagate SCSI drive, imaged it and moved it onto the Macbook with wireless.

Finally, I mounted the image into SheepShaver and voilá! The files (games, programs, data) are not only accessible, but actually usable!

Edit: I was also able to create an image file of the original internal drive of the Performa 460 with Apple's old DiskCopy tool and copy it onto the external drive, thus enabling me to transfer that as well. Both hard drives have now been backed up and it feels dandy!

What does suck mightily at this point, however, is that there's yet to be published a firmware patch for the DVD drive of the Mac Pro and we're left hanging with a region-locked drive. Man, having been an LG customer for years, I didn't even remember region-locked drives still existed! And yet this very drive is actually an LG one, GSA-S10N. I'm glad it's an LG, though, as some of the earlier Matsushita drives proved unbreakable altogether.
Top

While waiting for the patch, you could look at MacTheRipper, it can supposedly rip any dvd to your harddrive and remove the region code..
He's not heavy, he's my brother.
Top

Yeah, it's supposed to be good

I imagine poppa wouldn't have that much use for it, though, I'm sure he'd just like to "pop it in" and watch...

In other "Mac" news, we had such a big onslaught of viruses on the XP side of the machine that I nearly lost my cool

Users browsing this forum: No registered users and 2 guests